Surgery itself went well. During the follow-up appointment, my OB told me, and pathology confirmed, I had scar tissue and embedded retained placenta in my uterus. I suppose it's no surprise with what happened.

My OB cleaned everything out. Due to the nature of the scarring (Asherman's), she left behind a balloon catheter for a week. It looked like this: 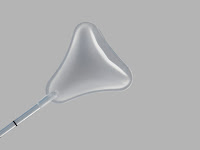 It was the most miserable thing I've dealt with in this entire journey. In my mind, I'd assumed that everything would stay inside me. I know that sometimes IUDs are used for Asherman's patients, and I've had an IUD that only had a tiny string in my vagina. I just assumed this would be similar.

Nope. Wrong on all counts. First off, that tubing is just slightly smaller than a quarter of an inch. Not at all like the string on an IUD. Having a string the width of a thread coming out of your cervix is a very different experience than having a .25" tube coming out.

Second, the tubing was long. Long enough to go through my cervix, and vagina, and hang a good few inches outside my body. From a practical perspective, that meant that anytime I moved, stood up, sat down, or rolled over, the tubing got pulled on a bit. Tubing that was going through my cervix and into my uterus. Imagine what that might feel like. On second thought, don't. It sucked, no one should deal with that.

Finally, surgery made my digestive system unhappy. Consider the logistics of trying to keep a dangling tube and connector out of the way as you deal with what you have to deal with when your digestive system is unhappy. This is especially fun in my case, since I know the bacterial infection that took my girls and led me to this point in my life was largely comprised of bacteria found in the digestive tract. And here was a fucking superhighway going right into my ute.

It sucked. But it's out, and it's over, and now we move on to the next hurdle: figuring out if the surgery worked and if  my tubes are clear. More on that to come.
Posted by NotMyLinesYet at 9:42 AM No comments:

My journey to parenthood started December of 2015. That was when I got the first positive test. That was when I experienced the first rush of utter elation that I was pregnant and DH and I were going to be parents. January 15, 2016 was the end of the elation. I was 10 weeks, and there was no heartbeat on the ultrasound. I was scheduled for a d&c the following work day, January 18.

Two chemical pregnancies later, I had a saline sonogram done. It found scarring, caused by the d&c. I went through an operative hysteroscopy to remove the scar tissue, and then went on to conceive the girls with the help of a great RE.

After losing the girls, and knowing my history of scarring, I went in for a saline sonogram in late December. I wanted to be sure my uterus was clear to try again in March of '17. Alas, this SIS made the last saline sono look like the "good" version. This time around, there are adhesions all over. I suppose it's to be expected, in light of the infection and the fact that it took two rounds of emergency surgery to stop the bleeding after delivering Zoe. I've gotten an official diagnosis of Asherman's.

Thus, I've been scheduled for another operative hysteroscopy. On January 18. It has to happen then, because of the timing of my cycle and the fact that my OB only operates on Wednesdays. I won't lie, I'm hurting at the thought of being back in the same hospital on the same day one year later, with only heartbreak to show for the intervening year. I've come full circle, and yet instead of progress or joy, there's only pain and loss. I'm terrified at the thought of waking up in the same post op facility that I last woke up in the night I lost the girls. Those are memories I don't want to re-live.