Welcome to Microblog Mondays! Want to learn more and read more? Head over to Stirrup Queens for the details!

One year ago today was trigger day for A and T's cycle. Three hundred and seventy five days ago was my baseline scan, where I saw an AFC that mimicked that from Alexis and Zoe's cycle. That day I sent a desperate plea out to the Universe for a similar cycle with a happier ending. Today, I got sleepy smiles from my daughter and my son as I left for work this morning. Today I'll get to go home to a house full of people, both big ones and tiny ones. Today I am grateful to the bottom of my soul (soles?) for how everything has gone, and for these fantastic babies.

I mean, just try and resist smiling back at this fellow: 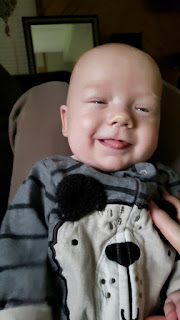 Thank you, Universe. I don't take it for granted.
Love,

Posted by NotMyLinesYet at 3:00 AM 2 comments:

Today is Quinn's second birthday. Today my daughter would be 2: running, smiling, looking forward to cake and presents. Instead, my heart breaks that she isn't here, that I never knew her, that her dad and siblings never knew her. My grief is fresh, despite the years and everything that's happened. It's at moments like these that A and T feel unreal. I'm not certain why, but I suspect it's because loss was my reality for so long that life seems almost unbelievable.

Logically I know that a day will come when I won't ache this badly for my missing girls, but that day isn't here yet. For now I comfort myself with Quinn's blanket from the hospital, her tiny footprints, and the memorial bears for each girl. How disheartening that of a beautiful, wonderful child, this and my memories and love are all that remains. 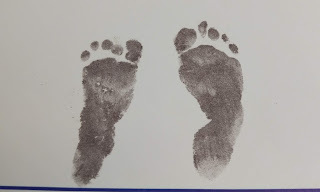 Posted by NotMyLinesYet at 1:32 PM No comments:

Welcome to Microblog Mondays! Want to learn more and read more? Head over to Stirrup Queens for the details!

Yesterday we experienced the Holy Grail for all parents. Well, perhaps the Holy-ish Grail, as I suspect the Holy Grail was having both sleeping through the night at once. That happened at the end of June.

This, this was something else. T and A were laying on their jungle play mat. T looked over at A, made eye contact, and smiled. A held onto the eye contact and smiled back. They kept up smiling at each other for nearly 5 minutes. I melted.

Years, losses, heartbreak, all soothed by the most amazing balm possible: my children smiling at each other.
Posted by NotMyLinesYet at 2:00 AM 2 comments:

I've been exclusively pumping for the 19 weeks since the babies were born. Breastmilk has been fortified with Neosure to raise calories since day 1. For the last ~8 weeks, due to supply issues, I've fed 50% fortified breastmilk/50% straight Neosure. There have been no issues.

I started back to work on Monday. Thursday, first Aaron, then both babies, started refusing bottles. This morning Adam gave them Neosure only and they slurped it down. Conclusion: they won't take my breastmilk any more.

Please tell me there's a fix to this! I have 300 oz frozen, and 1.5 days worth mixed that will have to be discared within the next 20 hours if they don't drink it.
Posted by NotMyLinesYet at 4:44 AM 2 comments:

On Monday I reclaimed the left bathroom stalls at work.

Two years ago this month, while pregnant with Quinn, I walked into the bathroom, picked a stall on the left, and discovered I was bleeding. Three weeks later we said goodbye to her. I haven't been able to bring myself to use those stalls since.

Monday was my first day back after maternity leave. I walked in the bathroom, started to turn to the right, and then decided that with rainbows here, it was time to reclaim the left, so I did. Using a work potty has never felt so celebratory!
Posted by NotMyLinesYet at 5:35 PM 3 comments:

Every so often I've met a woman who expresses a desire to have a baby because the child will give her 'unconditional love.' This strikes me as wrong in several ways. First, if you want something to love you unconditionally, get a puppy. I've heard tales of way too many toddlers breaking their moms' hearts by declaring that they don't love mom! Dogs: not going to have that problem!

Second, I believe that every child deserves to be loved unconditionally by his or her parents. I know the world doesn't work that way, but I'd like it to, anyhow. As for the child, he or she can feel whatever they want in return.

I grew up with the strong belief that my parents only loved me conditionally. As far back as I can recall, I've known they did not want kids. They didn't even like kids. I was definitely not the exception. Whether intentional, unintentional, inaccurate, or accurate, throughout my childhood I felt that their love only came from meeting certain conditions: perfect grades, perfect behavior, being the child that best matched their wants. Alas, knowing that no child could match their wants made that an impossible task.

I was extremely fortunate because my grandparents retired and cared for me. They gave me all the unconditional love a child could hope for. I am so grateful to them for their presence in my life. . . and I'm also grateful to my parents for all the positive things they gave me that don't fit into this post.

Now, unconditional love isn't the same as unconditional support. If T turns out to be an axe-murderer, or A a Trump supporter, I'll still love them both, but I won't support their decisions. Maybe that's some sort of false dichotomy, but it feels fair to me.

When I look at A and T, I hope they'll know and feel my unconditional love as far back as they can recall. As for how they feel about me, well, my mother in law snapped the photo below of me holding Tess. Given the look on her face, maybe, just maybe, I'm getting a bit of unconditional love in return right now. 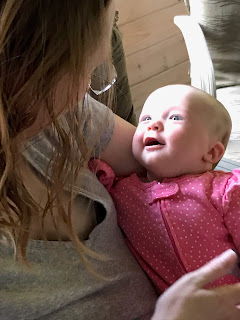 Posted by NotMyLinesYet at 2:00 AM 3 comments:

As the weeks pass with A and T, I'm struck by some of the differences in how I think now versus how I've thought and what I've experienced with past pregnancies. It's been interesting to me to observe the positives and the negatives, the similarities and the differences.

Overall, I'm grateful that my history isn't getting in the way of enjoying every moment with the babies, although it appears to have impacted my view of the future. Perhaps that's a good thing. I've spent so much of my life living for the future (e.g., "when I finish grad school, I'll . . ..", "when I get a promotion, I'll. . .", "when I have a living child, I'll. . ."). Maybe the true positive to come from all the pain and loss is that the now takes priority over the 'when', and is celebrated and savored in its own right.

After giving birth to Alexis, Zoe, and Quinn, I'd wake up in the morning and after a split second be slammed by the painful realization that they were gone. It hurt, and it would be weeks before each wakening wasn't accompanied by that realization and pain. I hoped for a future 'when' it wouldn't hurt so much.

After giving birth to A and T, I'm slammed by the alarm waking me up to pump after no more than 2 hours of sleep. The middle of the night wakings are painful because I'm so tired, but the instant memory of why I'm doing this -the now that is A and T - makes it worthwhile.

When pregnant with Alexis, Zoe, and Quinn, I often thought about their future and what I wanted for them. I imagined family traditions and activities we'd engage in as they grew older. I looked forward to creating so many memories with them.

With A and T, I've found myself consciously cutting myself off when I think of plans for more than the immediate future. For example, when looking at the fire pit in our yard, I thought for a moment of the fun they might have hosting parties with their friends as teens, but then I forced myself to stop dreaming that far out. I know the reaction is the result of so much pain due to lost future dreams, and while there's no reason to think we won't have a long future with A and T, apparently my brain isn't ready to let me move that far ahead.

What's the Same?
With Alexis and Zoe's pregnancy, from the moment I knew they were healthy girls, despite the morning sickness, I enjoyed everything. With Quinn, I loved every moment of movement, every ultrasound.

With A and T, I'm enjoying every moment, every milestone. Last week the babies started 'talking' and I'm almost awestruck talking back to them and enjoying it all. Tess is smiling like crazy and I'll do just about anything to get to enjoy one of those smiles. Aaron started grinning this week, just after his sister. I enjoy every second. They've both found their hands in the last two weeks, and I am endlessly enraptured by watching them suck their thumbs or lick their fists. It's amazing and wonderful.
Posted by NotMyLinesYet at 2:30 AM 2 comments: