I'm going to be hopeful for once and post this, although my next appointment isn't until Thursday. I got a fetal doppler over the weekend, and while I didn't find both heartbeats this morning, I did find one. I know how hard it is to find at 10 weeks, and how retroverted my uterus is, so I'm going to assume both are ok, and try to be positive.  That's hard.

how far along? 10 weeks
how are you measuring? Both babies were exactly on target at my last scan. A measured 9 weeks 1 day with a 184 heart rate and B was 9 weeks 2 days with 187. We'll see how things look Thursday at my viability scan.
size of baby? kumquat! (Such a great word)
heartbeat?  184/187.
total weight gain/loss? Down to 117, which might be margin of error. My IV clogged today, so I'm off fluids until tomorrow when I can replace it.
maternity clothes? Nope. Since I'm off work, I'm mostly in pajamas, but still almost no bump to speak of, only severe afternoon bloat.
stretch marks? Nothing new.
sleep?  Nightmares. Constant nightmares. I hate it. Up every hour or two to pee, and feel nauseous.
movement? Nope.
food cravings? No. Slightly less vomiting in the last two days. I've changed up my diet to get a bit more protein in, and so far it seems to be working. Protein waffles with PB, higher protein cereal with coconut milk, greek yogurt. I can eat a cheese omelette if someone else makes it for me, but I can't make it through cooking. Bleh.
gender predictions? I've been wrong every other time, so why not now? I'll go back to our guess with our first set of twins: one boy, one girl. Really just praying both are euploid.
what i miss? Not feeling constantly awful. Not being tethered to an IV pole. Doing anything other than Netflix and Internet on the sofa. God I miss working out.
what i'm looking forward to? Just hoping for good news on Thursday. And that the NIPT testing comes back wtih more good news. Even if it isn't diagnostic, it's helpful if it trends toward euploidy.
how are you feeling? Awful. So, so awful. I'm fine until I eat, but after that, the gas builds up, the food doesn't move and I just want to be in a coma for a few months.
comparisons to last pregnancy? I traveled to SoCal at 10 weeks with my last pregnancy. I can't even travel off the sofa this time. My energy is as low as you'd expect, given how few calories I'm eating. I'm so nauseous. I hope that someday I'll be able to enjoy this a bit more.
Posted by NotMyLinesYet at 9:04 AM 2 comments:

I've written before about advocating for myself, as well as the consequences of not advocating hard enough. We got another example recently.

I am pregnant with twins. I want to do NIPT testing, which is testing that looks at fetal DNA in my blood stream to determine if key chromosomes have the correct count. Two years ago, the genetic counselor told me that my insurance wouldn't approve NIPT for twins, so our only options were a CVS or amnio or NT screen/quad screen. I called my insurance back then, and verified that they would have covered the NIPT for twins, but because of all of our losses and my inversion, I thought the CVS was the better idea, so that's what we did. Then we lost the girls and I spent the better part of a year being told it was due to the CVS. That turned out to be bullshit, since the cause was actually my cervix, but let's blame the test anyhow, ok, it'll make me feel worse?

Ahem. Apparently some lingering guilt/anger over that one!

Anyhow, I don't want to do a CVS this time but with the TAC, I do want to know the babies' status with as much precision as I can, before 13 weeks. There are a few companies who offer NIPT, but only one claims to be able to analyze twins separately. That's Natera, with their Panorama test. The U of M typically uses the competition, Progenity. I did my research up front, and while I haven't read the tech studies, Natera claims it does analyze twins separately, checks zygosity, and can do things like give genders for each. Progenity does not claim to do that.

We saw the genetic counselor at 7 weeks. She told us the same thing we heard two years ago: Progenity is what they use. You can get false positives and it can cause worries. It doesn't work well with twins. It might not be covered by insurance.

I asked very specifically about Panorama for twins. The counselor let out the biggest sigh I've ever heard and acknowledged that Panorama does the test differently, which might actually be better for twins. And she said she could order it, but don't expect insurance to cover it (I checked, they will). We asked her what the sigh was for and she never really answered, but she did agree to order the Panorama if there were two heartbeats at 10 weeks. She seemed to think we were troublemakers, pushing against what she'd normally do.

So, we're getting the right test because I did my own research, knew what I wanted, and asked. It shouldn't be that hard, but it was and it's done. It's given me still more reinforcement on the importance of keeping track of everything yourself and advocating.
Posted by NotMyLinesYet at 5:54 AM 7 comments:

Yes, Virginia, there is a Santa Claus

And apparently he came early. Two babies. Two heartbeats. Both COMPLETELY on target.

I've been told that my uterus is very retroverted this time, which might explain the flat tummy and means more TV ultrasounds. I don't care, so long as the babies are healthy and growing.

Obligatory creepy ultrasound photo, with blobs that are only recognizable as babies to those who are in love with them already! 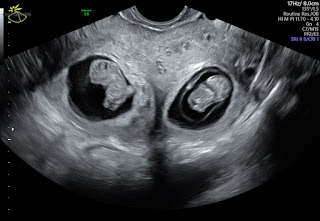 We go back to MFM next Thursday for a viability scan and NIPT blood draw, assuming everyone is still growing.
Posted by NotMyLinesYet at 8:04 AM 5 comments:

I'm honestly not sure why I'm bothering with this post as I'm pretty certain the heartbeats will be gone by tomorrow. Every morning when I wake up, my stomach is flat, and I'm sure that didn't happen by 9 weeks in either of my last pregnancies that were still viable at 9 weeks. I can hope that it's due to the vomiting and the medications I'm taking, but hope is harder and harder to hold onto each day. Still, I'm going to fill this out. One last memory if things go bad, and a reminder to myself that it isn't always the end if things don't go bad.

how far along? 9 weeks

how are you measuring? Both babies were exactly on target at my last scan. A measured 7 weeks 1 day, b measured 7 weeks 2 days.
size of baby? table grape
heartbeat?  A 150 at 7.2. B was 124.
total weight gain/loss? Nothing. Steady at 118, after losing two to start.
maternity clothes? Nope. Since I'm off work, I"m mostly in pajamas, but no bump to speak of, only afternoon bloat.
stretch marks? Nothing new.
sleep?  If I stop taking the Reglan for a day, when I start again, it knocks me out. I sleep for 2-3 hours after each dose. That's worn off now, so I'm awake most of the day, but the nausea is so bad that I often just lay down with my eyes shut.
movement? Nope.
food cravings? No. Still vomiting on the regular. I can keep corn chex down more than most other things, only if it's with coconut milk. Yesterday's vomiting was so violent I burst capillaries in my face and eyes. I look marvelous. Is this the 'pregnancy glow' they speak of?
gender predictions? Not considering until I know there are still heartbeats. I've also been wrong every other time.
what i miss? Not feeling constantly awful. Not being tethered to an IV pole. Going through a day without puking.
what i'm looking forward to? Nothing. Too scared about tomorrow's ultrasound to look forward.
how are you feeling? Awful. So, so awful. Moving makes me vomit. Talking makes me vomit. When I eat, it just turns into ammo to be thrown up later
comparisons to last pregnancy? Worried about the lack of morning bloat. Worried about everything. I know I was afraid last time, but not this afraid. My body  seems too similar to my blighted ovum pregnancy, although I didn't have vomiting with that. I wouldn't say I'm anxious, more resigned. If we still see heartbeats tomorrow, I may be able to be optimistic for a while.
Posted by NotMyLinesYet at 8:01 AM 3 comments:

Lactated Ringer's and Fear (aka 8.6 weeks)

Let's talk about HG for a few minutes. Hyperemesis gravidarum. I had bad morning sickness before. I puked a lot. I lost enough weight with the twins to qualify for an HG diagnosis, but never officially got one. This time, it's so much worse.

HG is vomiting up everything you eat, no matter how small.
HG is nausea that only gets better when you're asleep.
HG is being scared of eating, because you know how it will taste when it comes back again.
HG is vomiting when you move, when you talk, when you try to sit at a computer.
HG is hearing how other women with HG will sometimes reach a point that's so bad that they'll consider terminating, and after five weeks of puking, beginning to understand. (Note: I will do anything for these babies, including all this puking, so it's not something I'd do, but my sanctimony has definitely been replaced by empathy.)
HG is being horrified when someone initially suggests MMJ, and then being a bit sad it's not legal in your state, because you're that desperate.
HG is when you get down 600 calories on a good day and nearly all of them stay down.
HG is when you're tethered to an IV pole with fluids 8 hours a day, and that's ok.
HG is hell.

Being pregnant makes the hell worthwhile.

Here's my new best friends: my IV pole and my setting up your infusion place mat. (Brilliant, really.)

My doctor set me up with home IV fluids on Thursday, so I now have IV access and give myself 1-2 bags of lactated ringer's solution each day. That's actually been enough to knock down most of the vomiting, although not all of it. I rarely have ketones in my urine now. That's progress.

Of course, the fear is here, too. It looms larger than the vomiting at times. What if the vomiting isn't so bad because I've lost the babies and the fluids have nothing to do with it? Why is my stomach back to flat? Why am I not seeing a bump at nearly 9 weeks with twins? Why did my ever-constant nightmares vanish? Why is this so bloody hard?

Last ultrasound was at 7.2, and both babies still had heartbeats, although B's was lower than I'd have liked at 125. Both were perfectly on-track, size wise.

Next ultrsaound on Wednesday at 9 w 1 d. Praying for two good heartbeats, two on-target babies. If we see them, then we'll go back to MFM at 10.3 for another ultrasound and NIPT blood draw. There's a story behind that, but I"m too sick at this point to stay upright any longer. Sending love to all.
Posted by NotMyLinesYet at 9:16 AM No comments: