For many years, DH and I have been members at the local arboretum. We've loved wandering the grounds and watching the seasons change. From our very first pregnancy, we've looked forward to sharing it with our children.

We went there when pregnant with Alexis and Zoe, and talked about how much fun it would be to bring them back for long walks. After we lost them, on our first visit back, there in the lilac garden we ran into another couple with a double infant stroller - clearly newborn twins. It hurt, but we held out hope some day we'd be back with our own kids. During my TAC recovery, the arboretum was the first place I went, to wander among the Christmas displays. It holds a special place in our hearts.

Last summer I was still in too much pain, and pumping too damn much, to get out to the arb with the babies. Now with COVID, it's on a 'tickets only' basis. We managed to snag tickets for last week. It was awesome. The babies had fun. We had fun. The day at the arb that I'd dreamed of finally came.

I'm overwhelmed with gratefulness for where my life is. There are so many utterly terrible things happening around the world, even right here at home in Minneapolis. I know I'm tucked in a privileged bubble, and although I feel guilt, I'm also grateful for the joy that affords me. 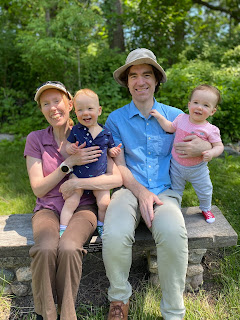 Posted by NotMyLinesYet at 12:15 PM 2 comments:

Today was stim day 13, or thereabouts. I lost count. All I can tell you is that I've hit my OOP Max on my med orders. Ouch.

For monitoring, I got the super peppy ultrasound tech, who always seems to have trouble finding my ovaries, and sometimes seems to have trouble finding my uterus. At the end of the scan, she excitedly told me that my largest follicle had grown to 13! (The screen behind her said 16.) I asked if there were any others, since I'm doing IVF and one isn't very helpful. She told me that my 4 had gone to 6. She was chipper about it, then fled the room.

Note to others: When telling an IVF patient that she only has one mature follicle and won't get more, don't be fucking chipper about it.

The nurse who called later told me we were good to start cetrotide, if we were ok with retrieving only one. I asked if the doctor thought we could do better, given my AFC of 8 and past unprimed cycles with 3-4 mature. Several hours later I got a call back saying we could cancel. I was told to continue Clomid for 3 more days, trigger with Pregnyl, then start testosterone priming for my next cycle two days later.

Problem 1: when they put me on clomid, it was for 5 days. Those five days ended 3 days ago, so I"m not on clomid now. It's not possible to continue taking it when you've already stopped taking it. Apparently they're putting me back on clomid and keeping me on clomid once CD1 comes and the cycle starts. I suspect I was supposed to still be on it, and this was a medication error. That doesn't make me feel chipper. That really doesn't make me feel chipper when I know that clomid raises FSH, and my high FSH level is the number one thing we're trying to combat.

Then I get my calendar for this new cycle. Stims start July 2, which I think is roughly 4 years to the week that we started stims for Alexis and Zoe's cycle. We always have good July cycles, so I'll take that.

Based on the calendar, I'll do luteal testosterone priming, then clomid, menopur, gonal f, dexamethasone, and saizen. I stay on the clomid the entire time. All of this looks good, except for a little note that reads "Continue taking Estrace until STIM begin." Ignoring the grammar, there's a big Problem 2: Nowhere on the calendar does it say to START taking estrace. It is, practically speaking, difficult to continue taking something that you've never started taking.

So there you have it. Cycle 1 was a crash and burn and cycle 2 is, thus far, going to be confusing.

I am remaining obstinately hopeful that our July 2020 cycle will produce babies as beautiful as our July 2018 and July 2016 cycles.
Posted by NotMyLinesYet at 12:47 PM 1 comment:

Nothing. I've got nothing. The largest follicle is at 3.5 mm. I guess the good news is that I don't have a lead, so things could still grow in a cohort. (Note to self: Yeah, right, Pollyanna!)

We're adding in Clomid for five days and scanning again on Monday. Here's some research on that.

I knew this was a long shot. I know it still isn't over yet. I wish I knew if I'm letting my past successes after really long odds inappropriately influence my current decision making. What heartbreak I could avoid with a handy crystal ball to prepare me for the future!

Crystal ball-less, and measurable follicle-less, onward I go!
Posted by NotMyLinesYet at 11:54 AM No comments:

I've said before that I'm a long-game type of person. I make decisions now for my longer term benefit. Grad school, some early jobs, my approach to save vs. spend, all of those weighed longer term happiness over shorter term happiness. Because of that, I know I have the skill set to stay motivated today even though the results may not be seen till a far off tomorrow. Despite knowing that, it's still hard for me right now to keep focused on all the behavioral and lifestyle choices I made when trying to get and stay pregnant during 2016-2018. I'm pretty sure that the main reason for that is because the outcome of any of these choices feels so far removed right now.

I'm on stim day 3 today. Normally that timing would leave me at peak motivation for a clean diet, sound meditation strategy, and carefully crafted exercise plan. Yes, I understand that those things provide an illusion of control rather than actually improving my outcomes. Still, that illusion of control has been so important in the past. Moreover, the ability to feel that I did everything that was within my control is crucial to my long term mental health. In asking myself the 'why am I having trouble staying motivated now', two answers come up. One is that I haven't lost a pregnancy recently. Over the four cycles that led to T and A, I got more and more motivated to maintain strict lifestyle changes after each of those three miscarriages. I don't have that fresh pain changing my behavior right now. The other answer is that the tangible happy outcome is so far off that I can't quite use it to leverage my behavior today.

My crystal ball tells me that my timeline will go something like this, barring any catastrophic failures that end things earlier: 3 IVF cycles @ 2 months/cycle will wrap up in December. Two operative hysteroscopies to clear scar tissue, complete with balloon stent & estrogen, completed by March. New laproscopic cerclage and recovery complete by May. FET attempt 1, July transfer. That means I'm over a year out from the faintest possibility of a pregnancy. I know my July 2021 self will be really damn pissed at my June 2020 self, if I miscarry a euploid embryo from a cycle where I could have been more careful about diet or exercise. I still can't quite bring myself to drop my chocolate chip habit. Yes, chocolate chips in greek yogurt is my one remaining vice. Yes, I feel guilty for not giving it up.

Maybe the outcome of this first round will be enough to motivate me for the next two. Maybe the outcome will be so bad we'll stop here. Or so good that we won't have to do two more rounds. Either way, it's time for me to summon either the motivation to drop my vices, or the grace to forgive my current and future selves for them. I'll get on that, right after I have my yogurt!
Posted by NotMyLinesYet at 6:15 AM 1 comment: