I called my OB to get betas done there, since this was an unassisted pregnancy. The good news about the OB is that the cost is $0, since my OOPMax has been met, versus $400 at the RE. The bad news is that they don't do same day results. I waited until 3 pm the day after my 10 am blood draw, then called. A hour later a nurse called me back and shared that my beta was 655. At 15 dpo. Amazing.

This feels truly unbelievable. How could we possibly have a sticky baby when my lining during IVF hovered below 3 at trigger and we couldn't get more than 1 euploid embryo from 27 eggs? There has got to be a shoe waiting to drop. I'm hoping that whatever tenacity has kept the little one growing thus far will hold out, and that s/he'll be healthy.

Posted by NotMyLinesYet at 3:44 AM 3 comments:

The plan was to try one round of Femara, with my next CD1, while waiting for surgery. In the interim, we enjoyed 'cheap, meaningless sex', as noted in my last post.

Approaching CD1, my temp dropped. My normal pre-CD1 headache started. But then it vanished. And CD1 didn't arrive on the day of the big temp drop, like normal. So I used a HPT on the night of 9dpo. And again on 10 dpo, and 11 and 12 dpo. 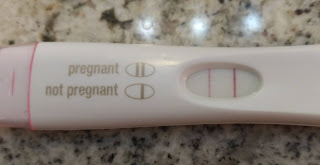 The lines have gotten dark enough I'm no longer convinced this will be a chemical pregnancy. Now I'm assuming it will be a blighted ovum, or a trisomy we have to TFMR. That's loss mind for you. Still, the 41 year old who got one single euploid from 27 mature eggs is apparently pregnant, the old fashioned way. Go figure.

Posted by NotMyLinesYet at 2:50 AM 7 comments:

In other words, I was having cheap, meaningless sex.

Is THAT what's meant by that term? Apparently I've been misunderstanding all these years!

Not sure what #MicroblogMondays is? Read the inaugural post which explains the idea and how you can participate too.

Posted by NotMyLinesYet at 1:00 AM No comments:

Over the years, I've developed a motto that applies to many situations: Never assume malice when incompetence could explain the situation.

My MIL is currently livid because Amazon delivered a box of canned soups to the front of our relatively long driveway, rather than by our garage or at our front door. They were delivered after dark and wound up spending the night in the driveway, which can't be seen from any point inside the house. It was freezing out, and although the cans are not malformed, she assumes the soup is ruined. She's especially livid because the delivery person apparently indicated 'hand delivered to customer,' which was clearly not the case since the customer was not a driveway. She's focusing on the fact that he lied. If we apply "never assume malice when incompetence is a possibility", then we see that the guy was probably using an electronic device with check boxes, in the dark, in the sub-freezing weather here in MN. He probably just checked the wrong button. Incompetence, not malice.

The motto applies in the fertility world. After we'd lost the twins and their sister, a dear friend, who had herself gone through IVF (successfully), asked "why don't you adopt?" As frustrating as I found that question, it certainly didn't come from a place of malice. Incompetence might not be the optimal description of where it did come from, but the lack of understanding of others' perspectives is a close cousin to that.

I try hard to avoid coming from a place of incompetence when dealing with others. I look at the work I'm doing in the social justice space, and I'm woefully aware that some of my words are likely to cause frustration or hurt, without me ever intending such. One situation that stands out to me, from years back, was when I commented on the eloquence of a speaker's words. I love words and language, and I love anyone who can use language elegantly. This speaker, a woman of color, could. I commented to a colleague, also a woman of color, how well spoken the speaker was. Since then, I've seen that "well spoken" is often viewed (and meant) as a way of indicating surprise that a person of color is more intelligent or educated than expected. It is a micro-aggression. That was not my intent, I felt no surprise, only tremendous respect that the speaker communicated so much more eloquently than I could on a difficult topic. But in coming from a place of incompetence with my comment, I caused hurt.

I can't speak to what the Amazon delivery driver's intentions were. I can acknowledge my own intentions, and step up to reduce my incompetence in interacting with others. I can learn new language, I can do things that make me uncomfortable to make others more comfortable. I can't be perfect, but I can try to be better.

I had been told that I'd hear back about the job I interviewed for on Monday or Tuesday.

Monday and Tuesday passed with no word.

I went to bed Tuesday night with the thought: "Wow, it's pretty bad when you're the only candidate interviewed and you STILL don't get the job!"

Wednesday I got the call: I got it!

I'm excited. There's no change in level or pay, but it will be something different, something I have expertise with, and with a manager and team I'm thrilled to work with. Of course, our company moves leaders every two years or so, so the manager will probably get moved soon. I will be sad about that, but in the past it's worked well for my career progress. The one down side of this position is the possibility that I'll get pigeon-holed into it. I've been moved roughly every two years, which has been nice and good for my development. The person currently doing the job I'm getting has been doing it the entire seven years I've worked here. I am one of the only people in the company with the right technical expertise to do the work. That will make it hard for me to move, because the work is crucial to the company's mission, and if no one else can do it, then there'll be no chance for me to step out and someone else to step in.

All that said, taking this job was a calculated risk. Right now I value stability and work-life balance above career progress. The job level I'm at is the start of the point where you need to be "on" 24/7. I check in on weekends some, but the need to spend a lot of weekend time on work is relatively low, so long as I manage my time effectively during the week. If I moved up a level, I'd be at the point where weekends, late nights, and early mornings are the norm. I'm not interested in that right now. The role I'm leaving had near zero weekends or late nights, but it was also not very stable. I'd been slowly engineering myself out of a job for much of this year by automating a lot of the work I was doing and building out clear processes and tools to allow someone of a lower job grade to do the work. I was going to need to pick up something different in 2021 or face the risk of job elimination. The likely things for me to pick up weren't of much interest. As I was writing this, my company announced mass layoffs in 2021. So hopefully this was the right move to make. I guess we'll see.

In the most brilliant case of insurance buffoonery I’ve seen yet, when my company started offering fertility benefits this year under a fertility benefit plan, they dropped anyone with an RE designation from their regular medical plan. No big deal, right? Well, the fertility plan only covers IVF, IUI, OI/TI. It doesn’t cover any surgery or procedures outside of those. I want to have my Asherman’s treated by a surgeon who uses microscissors. Every living surgeon in MN who uses microscissors is an RE and therefore is not covered by my insurance. There was one surgeon who was just an OB, and covered, but he died unexpectedly in June.  Two others are both an RE and an OB.  Although my insurance covers every single other doctor at their network (Mayo clinic), it doesn’t cover them, because of the RE designation. I tried an appeal, given that the surgery is not solely for fertility reasons and they are OBs as well as REs. I was denied.

For a while, I started to panic that this was it. I wouldn’t be able to find a covered surgeon, so we’d never be able to transfer our little day 7. That was not the ending to the story I was expecting, honestly. I sent out a desperate plea, which a dear friend forwarded to her RE. And thus I found an OB in St. Louis who uses microscissors, balloon stents, and long estrogen courses (best practice), coupled with a second-look hysteroscopy (also best practice), to treat Asherman’s. He’s in-network. Did a consult this week, and he’s highly knowledgeable, up on the research, and willing to give my uterus a look. So it looks like I’ll be making the nine hour drive, then spending a week in St. Louis while waiting for the stent to be removed, then driving home, and finally flying back six weeks later for the second look. During a pandemic. Because my idiotic insurance won’t cover a skilled OB/RE who is local.

Despite the worry that this entails, the bigger worry that this doctor brought up is actually that the issues with my uterus are not simply Asherman's, but also the result of problems with my c-section scar. Those can only be resolved via lap. As a result, the plan is to book the OR for a hysteroscopy and lap, start with a hysteroscopy, and convert to a lap if the c-section scar is the issue. So I may be recovering from a lap, 9 hours from home, because my insurance won't cover anyone local. Stupid decisions, brought to you by stupid insurance.

Posted by NotMyLinesYet at 4:01 AM No comments: