My prior post focused on the decision to proceed with an attempt for a third. That glosses over the fact that at 40, with an AMH of .5 and IVF as our only option, our probability of having a live birth is probably in the 5-30% range. I am nothing if not a realist, so I know the entire debate over having a third or not could be entirely moot. Still a decision to proceed with IVF (or not) must be made now. If we're going to decide to stick with two kids, then there's no need to proceed with IVF. The end result of all of this is that I feel like I'm constantly putting the cart before the horse when talking about if we should have a third, since the chance is so low, while simultaneously feeling like it's in my best interest to have the cart sorted out before attempting to buy a horse!

My biggest concerns: Money. Physical misery associated with a new TAC/c-section/Asherman's surgeries. Messing up the awesome that is our current life.

DH's biggest concerns: Revisiting the trauma of more hospital time/medical procedures/late losses. Waiting longer to do things important to him, like travel and bike riding with the kids. Getting stuck in the fertility treatments/surgery/waiting loop we've been in for years in the past (this probably boils down to the first two). Disagreeing with me on how to spend money when finances become tighter with another kid.

People, including my therapist, have asked how I can consider the idea of going through the physical hell I've been through before, with TAC/HG/C-section. My only answer is that I've always been a long-game type of person. I'm betting that as hellish as the physical recovery will be, it'll be worth it in the long run to have another child. This morning, I asked T for a hug. She came running over and buried her head in my shoulder. That, right there, that's worth an awful lot of physical misery. So I think my cart is firmly on the 'let's try to get a horse' train. And I appreciate that if the horse doesn't come through, the ache won't be the same as it was before A&T. Now if I can just hold on to that perspective throughout the road ahead.

Posted by NotMyLinesYet at 12:52 PM No comments:

I have been mostly silent in this space on thoughts about trying for a sibling. Outside this space, I’ve talked to my therapist, to DH, and to myself. I can’t speak to the therapist, but DH and I find ourselves conflicted. It’s complicated.

We also both agree that our family right now is amazing. Everyone said this age is fun, and they were so right. The kids are interactive, funny, and overall delightful. I wanted living kids, but was unprepared for just how awesome they would be. Would a third amp that ‘awesome’ up, or strain it? At least at the moment we have a 1:1 parent to kid ratio. We’d lose that with a third. T is already a great “big” sister to A, would it get better with a true ‘little’ sibling, or would the reduced attention on her cause a negative cascade? It’s complicated.

I thought that the question might be answered for us medically, but it wasn’t. My first PP cycle came, and I went back to the RE, who by some miracle was still doing testing. My AFC was 9. That’s the best it’s ever been. My AMH was .5. That’s .1 higher than it was 4 years ago. My RE called me “stable” and said she’s game to proceed to IVF if we are. She said our situation is time sensitive enough we could start with my next CD1, despite our state’s SAH orders. DH wasn’t ready. I am ready, but I still wonder if I should be.

So there you have it. Lots and lots of talking, but no more answers that I had 6 months ago. I *think* we’ll try a round of IVF in May/June and see how I respond. We can make decisions from there. It’s complicated, but that kicks the ball down the road and perhaps gives us a medical answer after all.

Posted by NotMyLinesYet at 7:43 AM 2 comments:

T and A turn one year, adjusted, today. It's hard to believe that it's been a full year since we brought them both home from the NICU. Overall, things are going really well. They're growing, developing on track, and are just a pleasure to be around (most of the time). They've caught up to their un-adjusted age's growth curves and seem to be hitting most developmental milestones on an unadjusted track. Eating is the one thing that's challenging, as both are very picky eaters and don't really want any solid solids. Outside of breakfast foods (eggs, oatmeal, yogurt), and fruit (pureed), the list of foods both will eat is near zero. Even traditional kid favorites like Mac N' Cheese or chicken nuggets are often rejected. Veggies are even harder to work in. I'll keep trying and remind myself that they're above the median on their growth curves, so unlikely to starve. 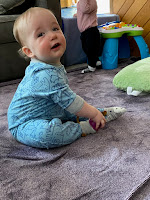 Posted by NotMyLinesYet at 1:52 PM No comments: