Please allow me to introduce the two newest loves of my life: Tess and Aaron. She's the brunette, he's the blond. 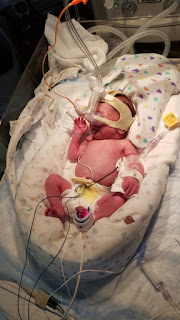 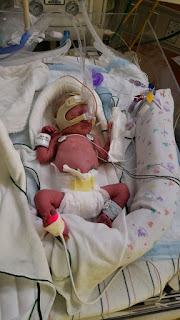 I started contracting again during my parents of multiples class last night. They kept getting closer, so we called and went in. At that point they were 3-6 minutes apart, and within an hour the cervical pain was constant. The decision was made to do a c-section ASAP.

Despite the fact that it was 11 pm and she was not on call, my OB came in for my c-section. Because of the concern of hemorrhage, and the challenge of cerclage removal, the on-call OB from my practice also came in. Several of the nurses were the same who were in triage for my Jan admission. Everyone was so thrilled for us.

Baby girl was born a few minutes before midnight, weighing in at 3lbs 11oz. Her brother was born a minute later, and was 3lb 7oz. They are so beautiful to me, although I've only barely seen his face. No hemorrhage and cerclage came out clearly!

Alas, I've been puking too much to go downstairs and see them. So, so sad about that.

Both babies are on CPAP, otherwise doing well. One day at a time. I'm still on heavy meds, so apologies if this makes no sense. Trying to keep from going mad waiting to see them again.
Posted by NotMyLinesYet at 1:49 PM 12 comments:

Still pregnant at 30 weeks and 3 days! Just four days left to hit our 31 week milestone, and I’m even home again. To say I’m grateful is a massive understatement.

I’m also struggling. I feel like a bomb whose fuse has been lit, but can’t be seen, so there’s no way of knowing when the explosion will happen. Each contraction I get during the day makes me think: is this the start? Will I have to go in again? Each time I wake up at night and everything hurts, I wonder if it will turn into the same contraction pain I had a few weeks ago. I’m just bloody scared.

At the same time, I’m 30 weeks! I’d have given anything to be 30 weeks and scared in my past pregnancies. It’s an easier scared than 19 weeks and pPROM’d. Maybe it’s fair to say this is scared and that was terrified.

I’m not keeping up well. I’m trying to work when not in the hospital (actually I worked a ton while I was in this time, taking conference calls at all hours to try to wrap things up). It’s good due to the distraction, but it’s hard because I never know which action items I take on that I’ll get to complete and which will be dumped on someone else if/when I am out again. I’m not keeping up with friends and family as well as I’d like, because everything just seems harder right now. I guess that’s what fear does to you. Well, fear and a 30 week twin pregnancy with regular contractions!

Thank you to everyone for keeping us in your thoughts. That really helps with the scared and it’s so, so appreciated, even if I’m not doing a good job of saying so, or staying up to date here. It’s so comforting to know these babies have people all over rooting for them, along with their big sisters and great-grandparents. That gives me hope.
Posted by NotMyLinesYet at 2:46 PM 6 comments:

Alas, no news really meant: my cellphone forgot my account password and I'm stuck in the hospital and couldn't look it up.

Same basic story: started having painful contractions every 7 minutes and went in where they were confirmed via monitoring. MFM made the decision to try to keep me pregnant for a few more days with the hope of getting a rescue dose of steroids and mag in. Good news: dose is in as of midnight tonight. Bad news: having lots of contractions through the tocolytics. I'm not super optimistic that we're going home again still pregnant this time.

Had another NICU consult today and they really pushed that 31 weeks is when everything gets better, so I'm hoping for 8 more days, but don't know how realistic that is. Hopes, prayers, good juju, all are appreciated.
Posted by NotMyLinesYet at 4:45 PM 7 comments: