What I Have and What I Don't

Let's start with the end, the most important part. What I have and what I don't have. Today, I have a beautiful, amazing, 4 month old daughter. She is sweet, happy, constantly smiling, and she sleeps well. She's a unicorn of a baby that I never would have dreamed to ask for. I feel so much joy every time I'm with her.

Today I also no longer have a uterus. Not by my choice, unless you feel that choosing between death and a hysterectomy is a 'choice.'

I also will never have the experience of taking a baby home with me on my discharge. My beautiful, happy little girl spent her first days in the NICU, on a vent. That sucked.

I think the complete story of the last ~9 months is too long to fit in one post, so perhaps I'll start at the beginning for today. Let's go back to where I left off before. I had a TAC. In total honesty, thanks to the anti-nausea meds during surgery, the best I ever felt in the first and second tris were the days immediately after the TAC. I was low nausea for a while and it was so wonderful that the pain of abdominal surgery when pregnant was just a nuisance. Then the nausea and the vomiting came back. I kept throwing up into the third tri, and the nausea was debilitating.

At 26 weeks I started having contractions, but they slowed with tocolytics and L&D sent me home.

At 28 weeks, I had a routine growth scan, and the OB thought they saw bleeding on the baby's brain. I was referred to MFM and spent the 48 hours between appointments terrified, learning what my options might be if baby had had a catastrophic brain bleed. MFM found no issues with the brain, but did find an umbilical varix, a dilation of the umbilical cord that raises stillbirth risk. I was advised to repeat scans every 2-4 weeks, and schedule delivery at 36 weeks if it did not resolve. Surgery was booked for 36w2d.

At 29 weeks I had bad, painful contractions and returned to L&D. They found a UTI, gave me antibiotics, tocolytics, and a course of betamethasone for lung development. I was basically placed on home bedrest at that point.

At 31 weeks 3 days, the contractions were consistently 8-10 minutes apart, although not at all painful. I had promised my OB that I'd call in if the tocolytics didn't stop contractions within a day, so I called in. Was told to come to L&D. L&D confirmed frequency, and at that point I was told I was getting the second round of betamethasone, magnesium for neuroprotection, and a c-section 40 hours later, as they would not risk going any longer with these contractions. That put the intended c-section date at 31w5d. Same as the twins. I knew what a 31w5d delivery and NICU stay looked like. I did not want that.

I lost my shit. I pointed out that the contractions were NOT painful, and that I was not ok with a c-section until that changed. I said that loudly, and repeatedly to everyone who came to my room. No one listened to me. OB said I was at risk of uterine rupture. I asked for an MRI so we could see if there was thinning to actually determine risk. OB said it was MFM's call. MFM wouldn't agree and said it was OB's call. OBs changed three times due to shift change and none listened. By some miracle, contractions slowed to 4 an hour by about 36 hours out. Still, no OB would come talk to me. Thirty minutes prior to my c-section time, anesthesiology was in my room talking about the plan for surgery when my nurse finally got the call to cancel the section. The agreement, though, was that I remained in-patient until delivery, which we all expected would be by 32 weeks.

I did continuous  monitoring for days. I never had less than 2 contractions an hour. Sometimes they were painful, but not frequent. Other times they were really frequent, but not painful. At those times, I tried to keep the monitors from picking them up. 32 weeks passed, and I was still pregnant. Then 33. I hadn't seen my kids since 31w3 days at that point, since they weren't allowed in the hospital due to COVID. I got permission to take a wheelchair ride to the parking lot, where we had a picnic together. That became our weekly routine: parking lot picnics once a week. I kept working from my hospital bed, dropped monitoring to twice a day unless more contractions started, and held my breath. There were days when we came damn close to surgery, but always slowed things down enough. The varix resolved. Five weeks passed. I asked my OB if we should try to delay delivery by a week, since 37 weeks is better than 36 for baby, but honestly I was starting to have more painful and much more frequent contractions by then, so I was somewhat relieved when she said 'no.'

Surgery was at 1:30 pm at 36w2d. It wasn't until they were prepping me that I realized how scared I'd been the whole time. Scared of rupture, of a more premature baby. Scared of the middle of the night section, without my husband. Scared my twins would stop loving me because I'd been gone so long. Scared I wouldn't get to be with my baby because of prematurity.

Everyone assured me that since I'd reached 36w2d, I'd get to hold the baby and have her in my room with me. Baby girl was a great 6.5 pounds. I got to touch her little feet through the plastic surgical drape and tell her I loved her for two minutes. Then the NICU took her for evaluation in the OR, with the intent of giving her back to DH and I to hold while surgery finished. But she couldn't get her oxygen levels up enough. So I was told she was going to the NICU for CPAP. And off she went with DH. And I sobbed on the table while a very nice nurse held my hand. Honestly, I'm sobbing again as I write this.

In recovery, I kept asking to pump, since feeding within the first 2 hours is critical to establishing milk supply. They kept telling me no, because the baby would be back to me at any moment and we could try breastfeeding. But she never came back. After two hours, they wheeled my bed to her NICU bay, and I got one absolutely glorious hour of skin to skin with her, before I was taken up to my hospital room on another floor. At some point that night, after I said goodbye to her, her lung collapsed and she went on the vent. It would be days before I could hold her again.

So  that's part one. Baby girl is glorious and worth everything I've been through. I certainly didn't get the pregnancy or post partum experience I'd hoped for, but I have no regrets about having another living child. Maybe the picture below can help you understand why.  This picture reflects her personality, always smiling and happy. 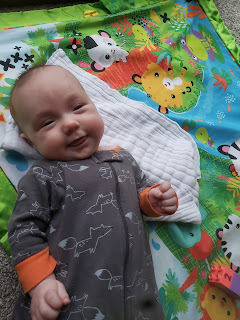 Posted by NotMyLinesYet at 11:31 AM